Back in the specialty pistols game

NCG, those are some mighty fine specialty pistols you have there. Classics!
As far as the Ruger No.1's, I have one: No.1B in 30-06 that I wouldn't sell/trade for anything. It's too nice looking and too accurate. I don't hunt any longer, but, it still goes to the range or more often, the desert, where I prefer to shoot. Avatar stuff>>>.
0 x
Top

dmanwarren wrote: ↑
Mon Nov 21, 2022 1:27 pm
Nice looking "specialty " handguns NCG! Love my Contenders ringing 3" gongs at 100 yards with the 41 mag being my favorite. Saturday at a huge gun auction here in central Nebraska a Exemplar in 22 hornet sold for $2300! It was a very high end gun auction with 9 Contenders and many many barrels. Biggest collection of Ruger #1's and #3's I've ever seen.

Somehow I missed this post, but VERY impressive Contender collection. I recently added a stainless G2 frame to my collection after I wrote the above post. One plus for my old arthritic hands with the Encore and G2 is how consistently easy they open. When I was running the original Contenders, they could range from easy to open to hard to open or in some cases not open at all, given a specific combination of frame and barrel.

Yeah, an Exemplar in 22 Hornet is one of my dream guns. Have never even seen one. Very rare. Not surprised at that price.
0 x
Top

Here's another classic specialty pistol I just added to the collection last week. In fact, this was the pistol that gave birth to the specialty pistol movement when Remington introduced in '62/63. It was quite a shock in the gun world at the time. This one, however, is a later vintage made in 1989.

This, of course is a Remington XP-100 (XP for experimental pistol). It's built on the Remington 600/40x rifle action. This one is the Varmint Special model in 223 and it wears a now discontinued Burris 2.5-7x pistol scope with an AO (also very hard to find, now).

Interesting history on the XP. The original was a shorter 10" barrel version chambered in 221 Fireball. Remington originally spec'd it out to shoot the 222 Remington, which was the premier accuracy cartridge of the day back in the 60s. Unfortunately, the 222 didn't do too well in a 10" barrel, so Remington took the 222 and downsized the case to make the 221 Fireball. The Fireball is much more efficient in a 10" barrel. Given its origins, then, the 221 Fireball was born as a pistol cartridge. At the time, it was the fastest pistol cartridge in production.

Yup, first of its kind. The TC Contender followed a few years, later. 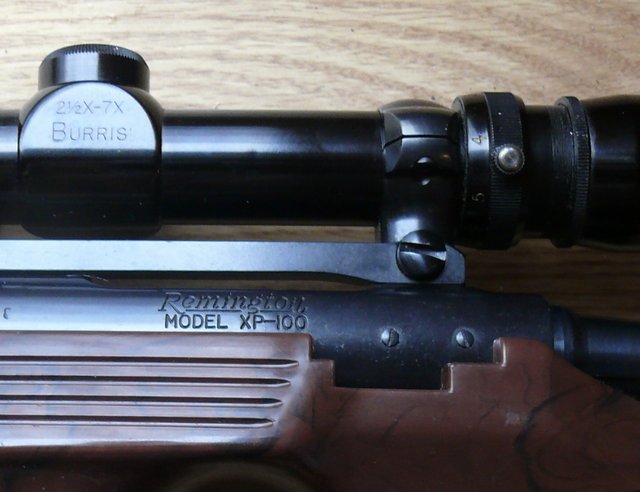 Happy Thanksgiving to you, too.

Yeah, Milek was a huge influence on me with the handgun hunting and specialty pistols. Those were the days. Handgun hunting and silhouette are pretty much history, now, though some of our generation still do it. Pistols are all about action shooting and self-defense, now. I get that, but I do miss the old days.
3 x
Top
Post Reply
15 posts