I taught private CCW classes for many years on my home range, most were couples, although many were significant others of those I knew. I also had nurses, real estate agents, and others whose jobs took them to lonely locations. My favorite students were the women who were anti-gun, but "finally" agreed to take " just the classroom session... But no shooting. "

One, at the end of her session, told me she realized that she had thought guns were awful growing up, because of the environment she was in. The class had allowed her to see that the firearm is only what you make it. She came back for coaching, and owns several guns today, including a compact .45acp.
1 x
You can tell a lot about the character of a man...
by the way he treats those who can do nothing for him.
Top

I carry Buffalo Bore standard velocity wad cutters in my Off Duty. High velocity ammo in a snub nose revolver is a waste.
1 x
Top

BrokenMarine,
I found out that women basically were my best students,and the anti-gun women were the most enthusiastic students after they got a taste of quality time on the line.
My range is a family oriented range and women feel completely comfortable there.
Good for you for teaching new students. They feel comfortable with a quality instructor. 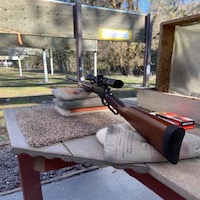 Understanding this is an older post and the OP most likely has made his decision I’ll offer another option since it has not been brought up so far.

My daily carry is a Ruger LCRX in .327 Fed Mag. This revolver has several differences from others mentioned above, for me these are advantages but we all have different opinions and needs when it comes to most everything.

Poly frame for weight reduction. (Smith does offer this as well)

Exposed hammer for single action shooting. (Smith does offer this as well but not in a Poly)

I carry this revolver in a Tagua pocket holster which I selected because it completely covers the trigger. My carry load is the Federal Premium 85 gr Hydra-shok JHP. This is a low recoil load which is helpful as this is a recoil generating combination of gun and caliber. I also carry an additional eight round Bianchi speed strip for back up ammo. This is a no brainer-grab it every time you leave the house setup. I keep it in my nightstand and it is so simple to just place the gun in my right front pocket and the speed strip in my left rear. It fits fine in both long pants and shorts. (Nightstand storage works for me as we have no children in the house and when the grandkids visit from out of state it’s placed in a lockbox.)

I have owned/carried S&W J frames in .38 and really like the advantages (for me) this Ruger offers. I have been a revolver owner/shooter for many years and mostly shoot single action due to years of shooting a revolver in Handgun Metallic Silhouette shooting. For me it’s muscle memory to cock the hammer prior to shooting and I believe that if I was ever in a high stress self defense situation I would cock it without even thinking about it. It’s my understanding from reading the rags that the Ruger triggers is better than the Smith. While I have owned both I have never had both at the same time to make a comparison but the trigger in my Ruger is great in both double and single action. It also came from the factory with a Hogue Tamer finger-groove grip which is very comfortable. I have average sized hands and this grip works well for me.

Another .327 Federal fan here, but I daily carry an SP101 4.2” for the extra mass, I would be uncomfortable with full power ammo in a lighter gun. I carry the excellent Underwood 95 gr Extreme Defender ammo normally, and will slip a couple of Buffalo Bore 130 gr hard cast rounds into the “next” chambers if walking in the woods.

I will comment that the stock SP101 trigger sucks, but that is easily fixed with some minor polishing and lighter Wolff springs. After some work it is very nice. It is the same internally as the Super Redhawk, so any any guide for that gun applies equally to the small gun.

The risk of single action shooting in a defensive situation is the light trigger pull and reflexive gripping when surprised or stressed. When this happens, some will tighten the trigger finger. On an eight to twelve (or heavier) pound double action trigger, not such a concern. With a three to five pound single action trigger pull, a reflexive grip can cause an unintended discharge and someone gets shot by mistake, or property is damaged. Lives changed forever.

Even if the shots ARE fired intentionally, the opposing side may try and suggest it was negligence and incompetence on the shooters part, based on past behavior. If the firearm is incapable of single action fire... That is one case that is lost before they get started.
2 x
You can tell a lot about the character of a man...
by the way he treats those who can do nothing for him.
Top

The last thing, Miss T distracted me, decocking the single action is not as safe and simple as they show in movies or on tv... a slip would equal and inadvertent discharge. We taught a technique that involved a thumb between the hammer and frame... But department protocols discouraged thumb cocking the duty revolvers for just that reason.
0 x
You can tell a lot about the character of a man...
by the way he treats those who can do nothing for him.
Top
Post Reply
39 posts