Put your range reports for all brands and types of firearms and other items.
Post Reply
21 posts

I'm taking Evan's suggestion and starting out the KC Outing thread. This is my view of our second shoot with a couple of targets filled up nicely at the Lake City Range.

Since I don't have any rifles, I spent about half the range time today at the pistol range shooting my Russian 45 Colt. Jim (JEBar) told me once more today how much he enjoyed shooting it, too.

Pistol shooting done, I packed up the Russian and spent time with everyone on the rifle range. I've lost count how many rifles were there today, but it was quite a collection. Evan also brought some of his Uberti revolvers: .357 and .45 Colt. Lots of firepower in our group (I'm gonna guess the ROs kept close watch on the three booths we commandered!). Yup, that camo wagon was filled to overflowing with rifle cases! Cool-looking buggy Evan has there.

This first target was Evan shooting Jim's (JEBar) .45-70. Only four rounds, but they counted big time. I'm sure Evan will post some of his other rifle POIs....he had a very impressive day, as did all. 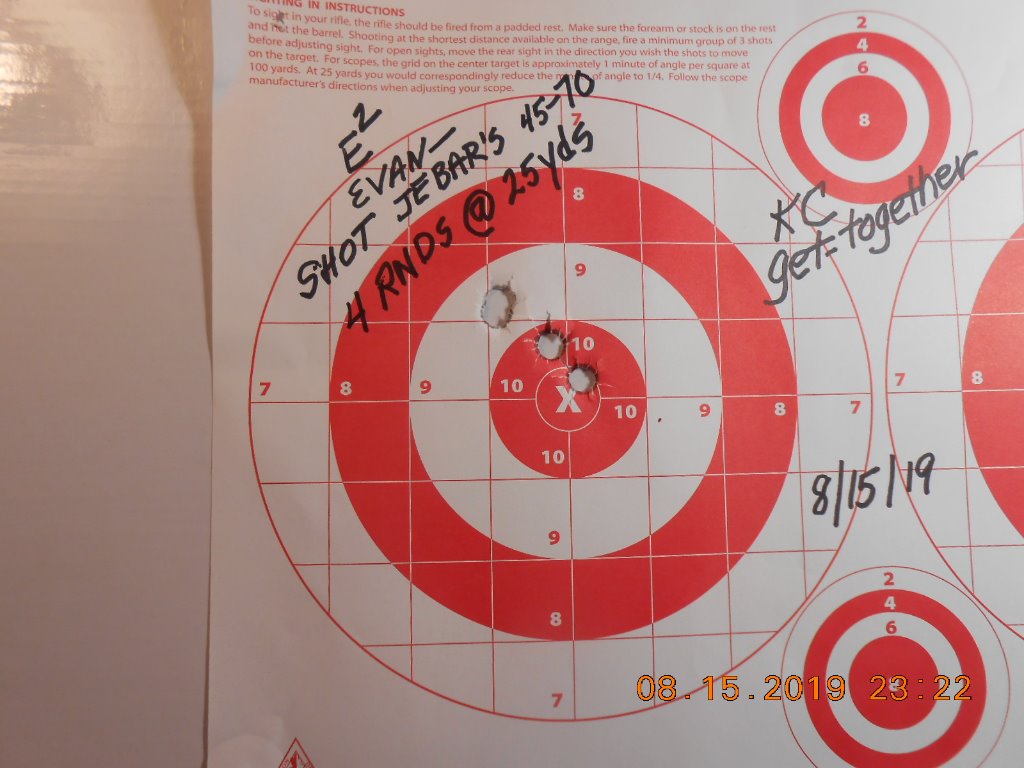 Sheesh! This second target should not have/could not have happened!! Jim (JEBar) really egged me on to shoot his Henry .44 RemMag lever action with a Nikon scope. While he was egging me, that beautiful Henry rifle was begging me. I haven't ever been able to do rifle shooting well at all, and that's why I'm a wheel-gun guy now. Alas, I gave in and shot the four rounds Jim set on the shooting bench. I cannot see how these POIs happened using a scope and (gasp) a rifle rest! All of above is about impossible to imagine. I think most of the reason is that Jim has a really fine-tuned rifle with a quality scope, and finely tuned-in sighting. It surely wasn't the shooter.

As I look again at the POIs in this 4-round group, I shake my head. You know, could it possibly have happened because of my new tri-focal glasses?!? 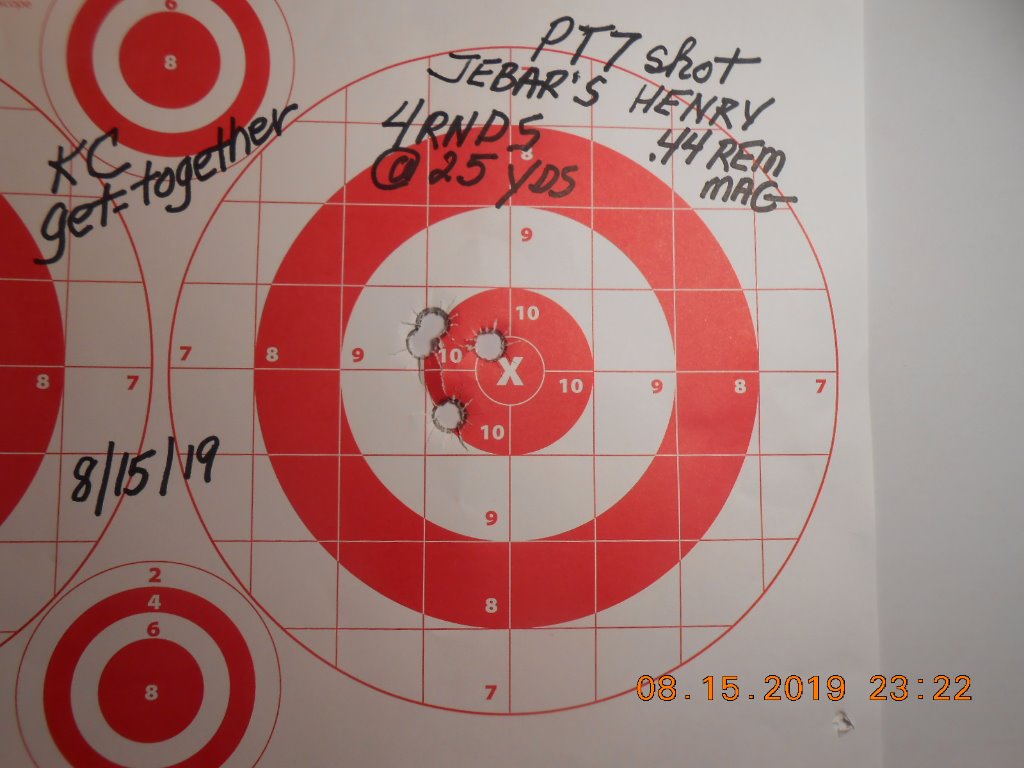 I really enjoyed the time watching Jim (Cofisher) shoot his Henry .357 Magnum carbine, and also chatting with him about the mods he did with it. I hope he does post some targets; but moreso, photos of his rifle and the mods would be great. The mods are to his sights, and he really did super on his set up. Looking forward to anything he posts. That .357 Carbine is his baby!

The dinner at the restaurant was a cool time with good food. It is located in the lower level of the Independence, MO Bass Pro Shop. The venue itself helped us ramp up with all the hunting yarns told. JEBar is indeed the story-teller of happenings from the southeast, and Cofisher is the bard of the western side of middle-ground Missouri. The only thing we really were missing was the campfire and metal coffee cups. Otherwise, perfect.

It's getting very late. I'm tired, but still pumped from the last two days of new friends and shooting adventure.
Try it, Henry Folk. You'll really enjoy such get-togethers

Whether it's the new tri-focals or not, you out-shot me for four rounds, so it may be that you need to re-examine the "I can't shoot long guns" narrative that now follows you around. To just pick that rig up cold and start blasting away with those results is pretty darn good.

Some might be wincing at our 25 yard distance, but it shows that, in your case, IT CAN BE DONE. Rifles are no different than handguns in that you start out close and gradually work your way out.

Looks like a good time was had by all . Nice to see you shooting the rifle again PT and good shooting. Could this be the beginning of PT back to rifle shooting again.
0 x
Young guys should hang out with old guys cause old guys know something

I'd like to follow up my Range Report with this comment to any Henry owners who have a .44 RemMag Henry. That is really a very, very nice caliber to shoot. Not very noticeable recoil at all. And the fact that the bullet can be carried and shot from a pardner revolver, for instance, makes this double-duty cartridge very appealing. I got a very small flavor as to why a number of you have wanted to acquire this caliber. It definitely is good stuff.

A note on JEBar's rifle. The steel model he has carries some rich-looking, darker wood furniture that is absolutely beautiful to admire. I continued to stare at the many Henrys you all post in photos that are dressed so well in Missouri wood. This was the first .44 I've seen (let alone shot!). It is a new-to-me, somewhat unsung rifle caliber. But it sure does the job.

Thanks again, JEBar - Cofisher - Esquared for all the fun you created by swapping rifles at the range! Never before have participated in a shoot like this, and it was an enjoyable time!!

Finally, not sure if this article/video clip about the .44 Magnum cartridge has been posted before. Even if so, it is a good read and good clip. Enjoy.

Okay you two. At our last dinner, we chatted about my shooting of that .44 Henry since I've had so many challenges shooting rifles for so many years. I'm certain I'll not own one of those great Henry rifles again...or any other long gun.

However, there was one way that my having a Henry rifle might (remotely) happen. After our shoot, we got to our vehicles and packed up all our equipment. I told JEBar that if he left his Henry .44 RemMag (and scope!) leaning against my car as he was packing his equipment in his rig, I'd be sure to take good care of it.

He knows how to set up a rifle all but perfectly! I don't know how to do that. I must report that after Jim finished packing his firearms, I walked all around my VW Beetle and didn't find a rifle case anywhere!

Nice try, Fellows. Thanks for thinking of me.

BigAl52 wrote: ↑
Fri Aug 16, 2019 8:57 am
Looks like a good time was had by all . Nice to see you shooting the rifle again PT and good shooting. Could this be the beginning of PT back to rifle shooting again.

Okay, here we go with what I was able to collect. Others may have more targets, so we shall see.... 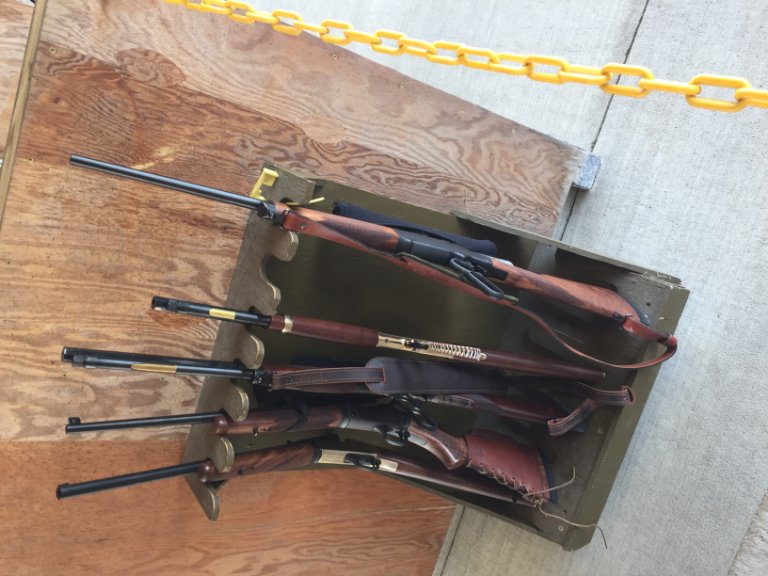 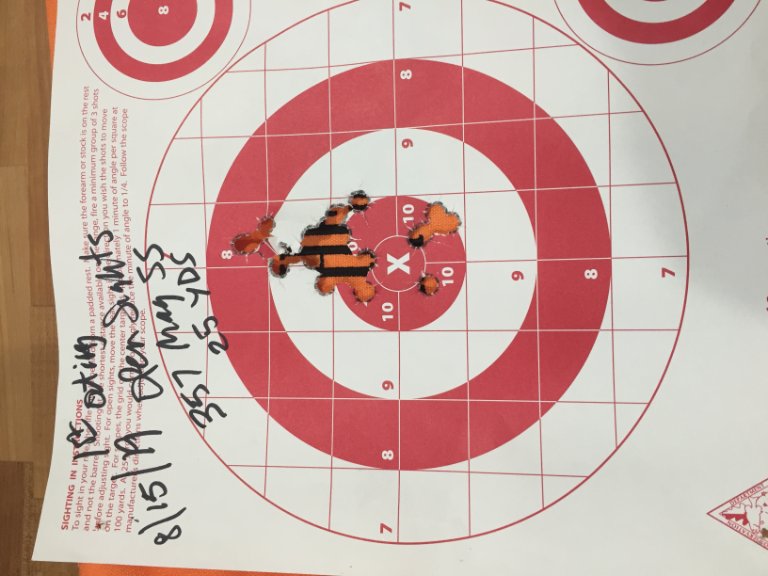 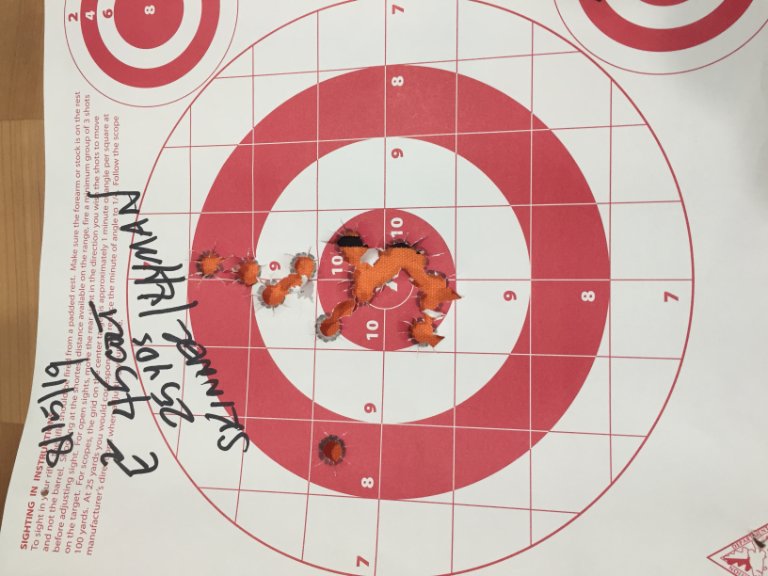 Still getting used to the Skinner/Lyman set-up on the BBB 45 Colt. What a fun rifle to shoot! 8.0 gr of Unique/250gr MBC HyTek, 25 yds. May change out the fine-pointed insert on the Lyman. Hard to tell where the "tip" is exactly. Started out high and figured it out... 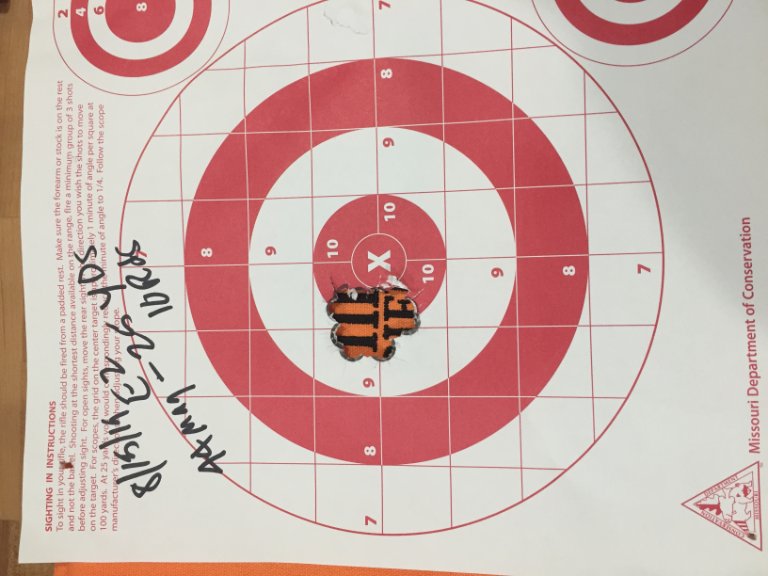 Had a chance to shoot a couple of tube-fulls of JEB's 44 Mag loads. Can't tell you what they were, but they were stout! Nikon Scope, don't know the spec, but no matter. It was true! 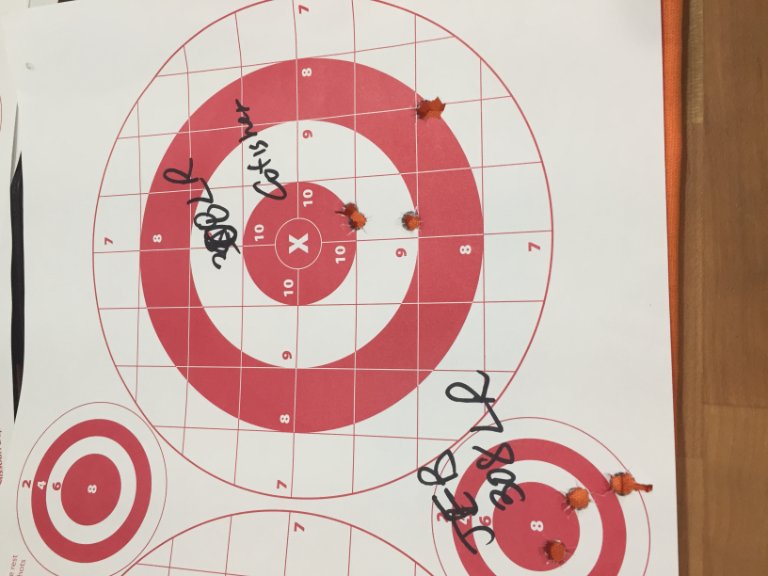 Cofisher and JEB took turns at the LR 308 and both looked great. Cofisher is contemplating the 308 Single Shot (I think), and he could get very good very quickly, I suspect... 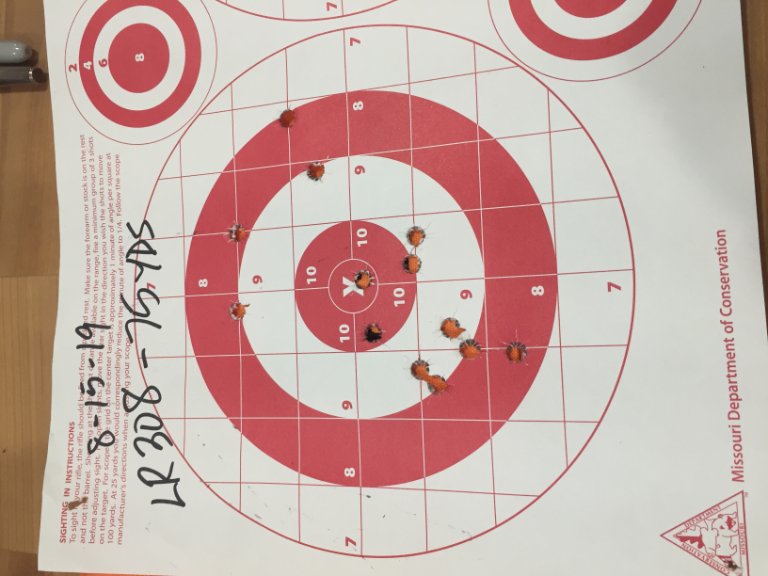 My last round of the day was the 308 Long Ranger out at 75 yds, and we were all a bit hot and wobbly by this point. Still pretty okay with the way that turned out, but more practice is in order. Hadn't shot it since before last year's deer warm-ups.

Nice Shooting. Great pics. The new 357 SS must of performed without a hitch.
0 x
Young guys should hang out with old guys cause old guys know something

.
PT, like the other enablers I think if you got a .44 RemMag Henry and maybe got help from JEBar replicating his setup, you'd be overjoyed to be shooting a rifle again. To you own benefit points you made below. Especially "Not very noticeable recoil at all". Which if I remember correctly from your other posts is one of the big reasons you gave up on Long Rifles.


PT7 wrote: ↑
Fri Aug 16, 2019 9:14 am
I'd like to follow up my Range Report with this comment to any Henry owners who have a .44 RemMag Henry. That is really a very, very nice caliber to shoot. Not very noticeable recoil at all. And the fact that the bullet can be carried and shot from a pardner revolver, for instance, makes this double-duty cartridge very appealing. I got a very small flavor as to why a number of you have wanted to acquire this caliber. It definitely is good stuff.
...