Hunt with a Henry

Hunt with a Henry

Received my new HRA catalog yesterday. Lots of hunt with a Henry promo. There is a real nice foldout that shows rifles from small to large game.
I thought it interesting that none of the promos feature the Henry 1860 Original. Guess nobody hunts anything with them? Seems like a missed opportunity to me to not have your flagship rifle there somewhere. Just a thought.
0 x
1860 Colt SA Richards Conversion Revolver
1860 Henry
Coming soon: 1885 Winchester High Wall
All in 45 Colt
"No hour of life is lost that is spent in the saddle" Winston Churchill

Well maybe but if it was me and I spent that much money on one Im not sure Id drag it out hunting. But that's just me.
0 x
Young guys should hang out with old guys cause old guys know something

Hey Al, got the perfect setup.
From my back door, roughly 300 yds., there is a 4x8 heated hunting blind, sitting right on the ground.
You can literally drive a 2wd truck right to it. Park the truck get in the blind and kill deer.
Have done it, a couple years ago when I had a broke leg.
Have shot them from 50 to 135 yds., I've had them to walk by within 5 yds. with a 4 wheeler sitting right by the door.
Maybe I should get one...

RP
0 x
"Out here we appreciate a spirited women Almost as much as we do a spirited Horse". John Wayne

I don't recall seeing where 'dangerous' was ever mentioned as an element of hunting with an 'original ' Henry.

Mostly I see it as a 'numbers' issue given the Original Henry is a rifle that will owned by only a certain % of gun owners overall and most likely these owners are not hunters.

Considering this how many members on this forum how many actually own an 'original' Henry? - It is far less than the other models.

Long term hunters typically have their 'pet' hunting rifles well established with ammo and performance and are not so inclined to change - especially if this were to be a longer, heavier rifle with a caliber of limited range - and the .45 Colt (and .44-40) are calibers of very limited range. This may not be so much of a problem in areas of limited hunting distances but say where I am, shots can be (and typically are) several hundred yards on game.

I see the Original Henry as being owned by say, those who are more likely to own firearms as a hobby, or possibly a new interest, and not necessarily hunters in the formal, or traditional, sense of the word and description.
Last edited by Mistered on Thu Aug 15, 2019 12:10 pm, edited 1 time in total.
0 x
Top

I don't have an original, but I do have a brand new American Eagle *

and I plan to tag some tree rats with it very soon.
Of course, I also have a Henry H001 in .22lr, and a Henry Frontier in .22mag, but I think I'm going to concentrate on The A.E. for now.
If she shoots as good as she looks, there won't be many squirrels left around my neighborhood come the end of season.

Just curious. I can't imagine they just shot possums with the 44-40 in the old days. Anyhow, guess it's not a hunting rifle per say. I do realize that the originals were 44 Henry rimfire which would be anemic by today's standards. But 44-40 in the old west took lots of deer.
It's all good. Regardless, I love my 1860.

I might take it then Vaquero. But here I dont have a setup like that. Its throw it in a case and drag it to the hills then out of the case into the forest.
1 x
Young guys should hang out with old guys cause old guys know something 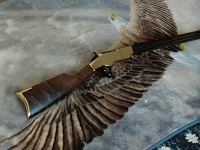 I would take mine out hunting. I think it would be fun. I don't have to worry about long range here as there is little chance of a shot over maybe 75 yards but more like 50. I can't use it here in NY because we are not suppose to have it. 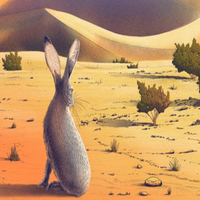