Put your range reports for all brands and types of firearms and other items.
Post Reply
1 post • Page 1 of 1

Picked up a new CZ 457 American in .17 HMR, gave her a good cleaning & hit the range yesterday. Have a lot of experience with CZ rimfires (452 & 455), but this is my first .17 HMR & first 457. Took three boxes of ammunition, though I wish I had read up on .17 ammo a bit before purchasing. Turns out the Winchester I bought is widely regarded as junk, and the only five rounds I shot support that premise- roughly 4" spread at 50 yards, and all five cases split at the neck. No idea what to do with the rest of the box, certainly no interest in shooting it. The CCI & Hornady 17 grain V-Max are essentially the same, both made by CCI from the same components. Oh well, at least it might lend insight as to lot variation. All results shown below, good bad & ugly. Mess in the middle is from rough zeroing, & variable POI due to slight scope adjustments between groups to my satisfaction. 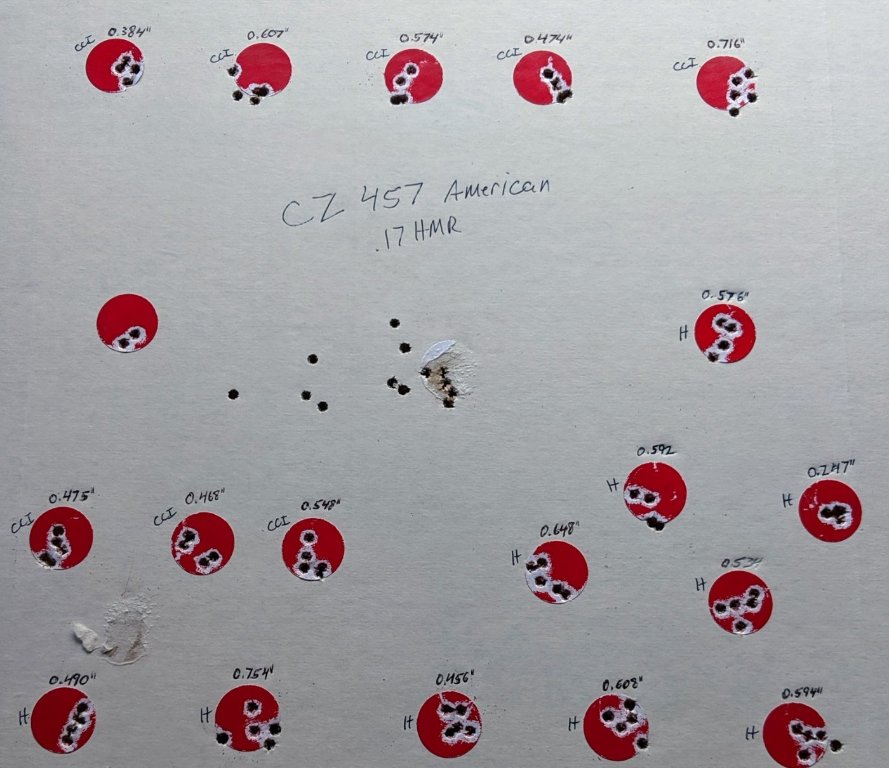 
As expected, little difference between the Hornady & CCI. Ten 5-shot groups of Hornady averaged 0.550", eight 5-shot groups of CCI averaged 0.531". Can't quite call it a 1moa rifle at 50, but close. Torque on both action screws set at 20 in/lbs, will experiment with that to see if minor improvement can be had. Also want to try the 16 grain lead free ammo, and some flavor of 20 grain.
All in all, fairly happy with the precision & consistency. As with all rimfire, results are beholden to ammunition quality. I suspect with "match grade" ammunition (unfortunately, no such thing in this caliber) it might be a real tack driver.

Cherry pickin' time, I'll start with the bad. Though really not all that bad for the worst group of the day (sans Winchester). 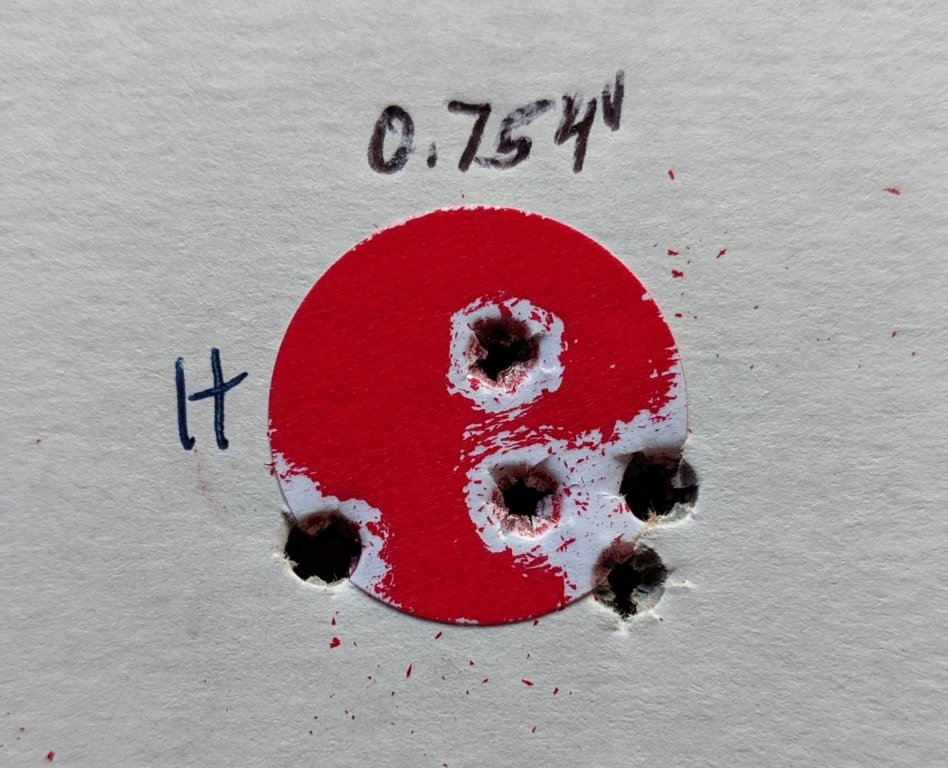 
Oh if they could all be like this one... 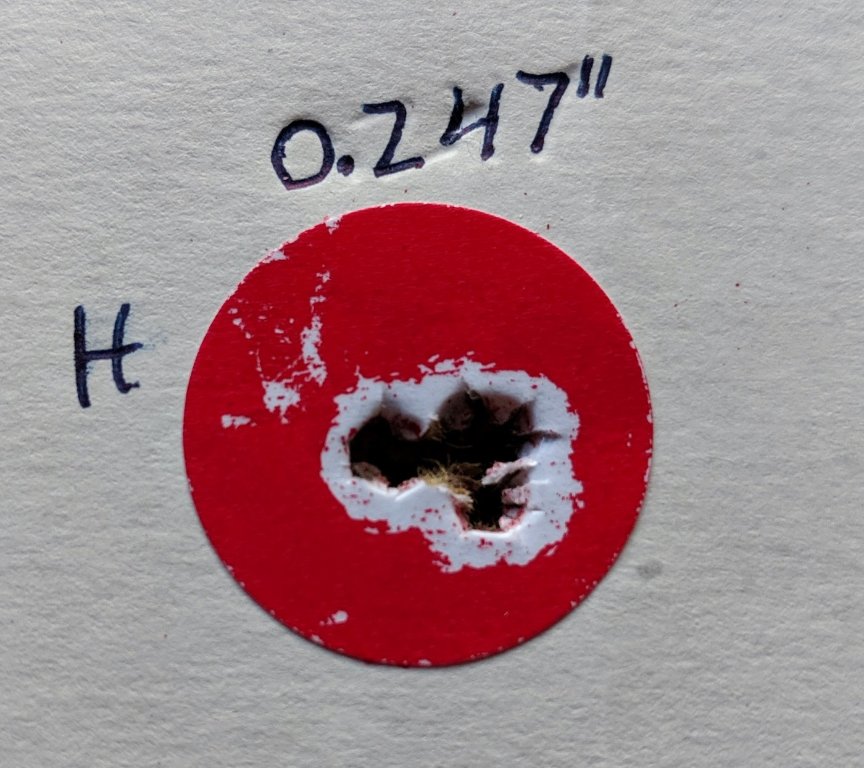 
Some wailing & gnashing of teeth regarding the 457 vs previous generations (as with the change from 452 to 455), but I'd call this a pretty darn good start. It's a sample of one, so take with a grain of salt but I see some things I really like in comparison with the 452 & 455.
Always wished the 452 & 455 Americans had a bit more barrel length, & I do indeed prefer the balance of the 457 to either. Some balk at the 24+" barrel as unnecessary for a rimfire, & I get where they're coming from- but it works well for me, especially away from the bench. Maybe years of carrying 60+" longbows through the woods have numbed me to the issues a long barrel present when hunting. It feels just like my 452 Trainer in that regard, which up to this point had been my favorite CZ rimfire.
The Trainer is designed for it's great iron sights though, & it's nigh impossible to get a good cheek weld when scoped due to the stock shape & high bolt throw. Even the Americans, while better, can be tough in that regard due to the bolt handle. With this one, I put a Vortex Crossfire II 4-12x40AO in Warne rings on, then shouldered the rifle with my eyes closed... opened them & had absolutely perfect alignment of eyes to crosshairs with a rock solid cheek weld. Couldn't have been easier.
Speaking of the bolt, I do like the reduced throw on the 457, and this one works smoother than any of my 452 or 455 rifles did out of the box. Actually, smoother than they are even now with the exception of the Trainer, which it equals without the benefit of thousands of rounds down the pipe.
Fit & finish are very good. Metalwork is pretty smooth, with only the occasional bit of chatter or tool mark in areas where it doesn't hurt performance or appearance. Stock inletting is quite good- better than on any of my 452/455 examples.
Magazine works fine, as have all CZ magazines I've used whether plastic or steel. Spent brass extracts & ejects with vigor, even the split Winchester cases. No problems with feeding either.
Had a 455 Varmint that exhibited an absolutely vicious cold bore flyer, as in ~2.5" off at 50 yards. Bothered me enough that I sold it with full disclosure to a fellow wanting a good target rifle, which it was after the first shot. Happy to report no evidence of cold/warm or clean/dirty flyers with this rifle. I was cleaning every 25 rounds, & allowed 30-60 minutes after each cleaning.
1 x
Top
Post Reply
1 post • Page 1 of 1